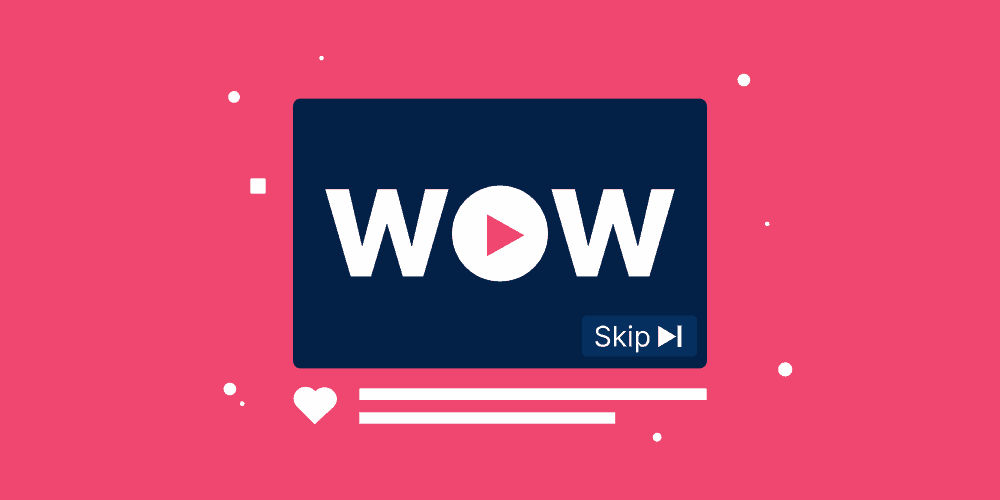 How to create video ads that WOW your audience

Video content is the new norm. In fact, the average person now consumes around 16 hours of online video content a week.

As a result, it’s getting tougher and tougher to WOW audiences with your video ads.

For your 30-60 second ad to stand out within that 16 hours, you need to do something special.

You need to make your audience laugh.

You need to make them say…WOW.

In this article, we’re going to take a look at how you can do that in 7 simple steps.

1. Speak directly to your customers

Before you start working on a video ad for your brand, you need to make sure you really understand your target audience.

One of the best things about video ads is that they can be targeted towards your ideal customers and, considering you’ll be paying for video views and placements, it’s important to know who those customers are!

We recommend creating detailed buyer personas that help you flesh out your customers and see them as living, breathing people. Here’s a free download that can help you with that: Create Buyer Personas that work!

Once you have a clear image of your ideal viewers in mind, you need to speak directly to them through your video ad script.

It may sound a little counter-intuitive, but your video ad shouldn’t be about how great your brand, service or product is.

Instead, it should be about all of the things your brand, product, or service can do for your customers.

Let’s take a look at two sentences from a burger brand (that we just made up!):

1. “We perfected our burger recipe so that we can be the best in the business.”

2. “We know you love nothing more than a good burger, so we continually improve our recipe to live up to your expectations.”

The first statement doesn’t include the word ‘you’ at all. It’s all about the business. And it’s kind of braggy and self-centred.

But the second phrase, while similar in intent, is all about the customer!

This subtle change can make a big difference for customers. They want to know what you can do for them – why they should choose your brand over a competitor.

Here’s an example of a video we created for Likezoid, an app for increasing Instagram likes:

From the very first second, this video talks directly to their audience and explains the different ways that the product can help them.

In addition to talking to them, the video also talks like them. The audience for Likezoid is young females who use Instagram a lot. This is reflected in the script and also in the tone used by the voiceover artist.

It just goes to show that there’s a lot to think about when it comes to the wording of your video ads!

2. Don’t be afraid to be different

So, you’ve seen your competitor’s video and you’re thinking…I need one of those!

But, while it’s important to keep up with what your competitors are doing, it’s also important to ensure you stand out from the crowd.

Just because an icon-based explainer video worked well for your competitors doesn’t mean you have to follow the same direction.

Instead, opting for a completely different style of video could WOW your customers even more.

This is especially powerful if you’re trying to disrupt a competitive market.

Take Bulb, for example. Bulb is an energy company – and a relatively young brand in an old market.

The energy market is full of big players who often use their past achievements, and the fact that they are well-established, as leverage in their video ads. Here’s an example from Shell:

This isn’t a bad video ad, by any stretch. In fact, it’s quite powerful. It’s got emotive music and it’s been filmed on a huge scale – there’s a very global feel to it.

A start-up company can’t hope to compete with an ad like that. So Bulb went in a different direction:

This snappy, humorous video couldn’t be more different than the Shell ad. And it was a great way for Bulb to grab the attention of potential customers.

Animated videos like this one are brilliant for helping brands stand out, especially if they’re on a budget. How else could Bulb afford to cast unicorns in their video?!

Daring to be different really helped put Bulb on the map. In just 5 short years, the company has gone from an unknown start-up to winning 4 awards in the Uswitch 2020 Energy Customer Satisfaction Report, including ‘Most Likely to be Recommended’.

3. Know what you want

A great video ad must have a clear goal.

Do you want to increase trust with a customer testimonial?

Increase sales with a product demo?

Typically when you upload your video ad to a platform, such as Facebook or YouTube, you’ll be asked what the campaign goal is:

This makes it easier for the platform to put your ad in the right place, and for you to calculate the success of the campaign.

But it’s important to settle on your goal waaaay before this point. The goal for your video ad should be clear in your mind before you even put pen to paper.

Having a clear goal will help keep you focused when writing the script and creating the video, so that you don’t waste precious seconds on things that don’t matter.

Yeah, customer testimonials are great, but there’s no place for them in product demo videos!

You shouldn’t try to cram everything into one video. Think of your video as the hook. Use it to reel people in towards your website, where you can then give them more information.

Making a good video ad is harder than you think. It requires weeks of planning, designing, and animating.

You may be tempted to try and create the video yourself – and there’s nothing wrong with that! Some companies have had great success doing that, like Dollar Shave Club.

Of course, that’s the exception rather than the rule. For most businesses, creating the video that you envision will either be too time-consuming, too costly, or too complicated.

It’s best to trust the experts on this. When you hire a video agency to create your ad, you can depend on their skills and also their industry expertise. They’ll be able to tell you what styles are current, what will resonate with your audience, and what won’t.

This can be particularly useful if you have a lot of stakeholders on board. Oftentimes, we’ve seen many people in a business try and cram everything they want to say into the video – the product team wants to talk about all of the great features, the sales team thinks it’s a good idea to include a shining testimonial, the big boss wants to include a history of the business – when this happens, it can be a case of “too many cooks”.

A video expert can be the perfect mediator in this situation. Not only that, they can act as a “fresh pair of eyes” – someone who is an outsider to your brand.

They can unpack what’s truly interesting and exciting about your product or service and bring a fresh sense of direction that can be invaluable.

At some point in his career, Jerome Bruner, one of the most cited psychologists of the 20th century, discovered that people are 22 times more likely to remember a fact when it has been wrapped up in a story – and this quote has been used in many places since.

While there’s no guaranteeing that your ad will be exactly 22 times more memorable if it includes a story, the truth remains that stories are impactful, shareable, and, indeed, memorable.

Here’s a simple example…Let’s say you own a dog treat business and last year you sold treats to 1,000,000 happy customers – impressive!

Instead of simply stating that fact in your video ad, you could tell viewers what those treats meant to your customers: “Our dog treats motivated many rambunctious puppies that are now valued members of the police force.”

Here’s another great example of a story being told in a video ad:

This ad, which was released to mark the 30th anniversary of the Renault Clio, doesn’t focus on the specific aspects of the car – how many miles to the gallon it gets, or how many have been sold over the years.

Instead, it tells a love story between an LGBTQ couple, and the cars simply feature as props in the background.

This ad was a great success. It was viewed, enjoyed, and shared by millions of people. Some even took to Twitter to talk about it – and this kind of word-of-mouth praise is simply priceless!

Okay, here’s the hard truth: almost every person that views your video ads didn’t actively set out to do so.

More often than not, the ad will be appearing before, after, or during some video content that they searched for.

And there’s nothing you can do to change that.

What you can do is make the experience easier and more enjoyable for them. Viewers appreciate it when you understand that their time is important to them.

To do that you need to get to the point, quickly.

This short ad from Direct Line does the trick:

In just 6 seconds it presents a relatable reason for viewers to get insurance. And that’s really all you need if you’re considering purchasing from them.

Of course, not all ads can be 6 seconds long. Sometimes a little more time is needed to explain your value propositions – especially if you’re a relatively new brand.

But always keep in mind that shorter is better. According to Wistia, if you’re going for engagement then you should try to keep your video ad under 2 minutes.

It’s also important to consider that most platforms now allow users to skip ads after 20 seconds or so.

If you know your video is going to be longer than 20 seconds then putting a lot of thought into pacing can help keep viewers’ attention for longer.

Check out this Honda ad:

This video steadily increases in pace, and even uses that increase as a challenge for viewers – a clever way to keep them watching until the very end!

7. Think about the little details

So, we’re talking about WOWing people here. And when it comes to impressing people, it’s all in the details.

When creating a video ad, don’t forget to think about the finishing touches – like sound effects, music, and little visual Easter eggs – that will really bring your story to life.

Here’s one of our completed videos:

Now, here it is without the sound effects:

All of the little touches, like the typing and clicking sounds, are really missed when they aren’t there.

The same applies with music. Here’s one of our videos with the soundtrack:

Here it is without:

Again, the difference is huge. Especially because this video relies heavily on the soundtrack complementing the movement of the kinetic typography.

When it comes to music and sound effects, we source ours from royalty-free sites. There’s a lot out there so it’s important to know which sites to go to in order to find the highest quality soundtracks. Here’s an article that can help: The 20 best royalty free music sites in 2021.

The video marketing industry is growing more competitive, and so it’s becoming increasingly more challenging to WOW your audience with your video ads.

But when you get it right, it’s so worth it! According to our recent video ads survey, 45% of people say they’ve gone on to buy a product or service that they first discovered through a video ad.

Ready to get started with your own video ad?