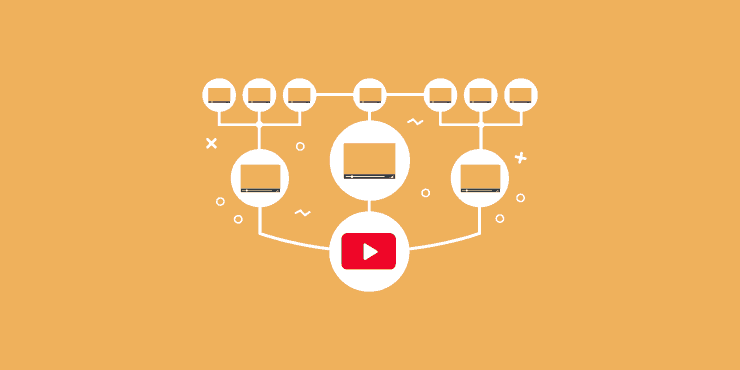 You might have heard about interactive videos, or even viewed one yourself. A lot of people are calling them the next big thing in video marketing – and we agree. Interactive video ads drive a 47 percent increase in viewing times when compared to linear video ads, and on top of that, they’re just more fun to watch.

Many brands are promoting their interactive videos on YouTube because of the platform’s built-in video editing features. It’s quick and easy to add interactive elements to your YouTube videos in a matter of minutes. If you’re wondering what these types of YouTube videos are or how you can create one, we’ve created this handy guide to help you get started.

But first, what is interactive video?

Interactive video is a new way to make your videos more engaging. They allow users to click, hover, swipe, scroll and drag video content to create a more unique and fun video experience. The most common functionalities include:

Brands are using these interactive features to accomplish all kinds of marketing goals, including increasing sales, driving brand awareness and boosting web traffic. We’ll share more examples of great YouTube videos that do all three later in the guide.

While these videos are a relatively new form of media for marketers, the concept of interactive video has been around for more than a decade. They were first created in 2005, back when Flash was one of the most popular platforms for developing interactive digital experiences. During this time, there was also a spike in global access to broadband-speed internet, meaning more people could view rich media content – like video – from their home computers. It was the perfect storm to bring interactive videos into the world.

A few years later in 2008, YouTube picked up on the trend, adding Annotations to their platform. These clickable elements let content producers layer text bubbles and graphics over their video content to create a more engaging video experience. They later pulled Annotations from their platform in 2017 because they created a clunky experience on mobile, but still allow brands to use several different interactivity features, including:

While several of YouTube’s features are only available with paid campaigns, there are some fun things you can do for free. For example, you can use YouTube’s Cards and End Screens to create hotspots and mimic branching, similar to what SMPFilms did with their Fortune Teller video. Instead of creating branches within the video itself, they use Cards on the video to link to different videos (versions of the story) for a create-your-own-adventure style experience.

YouTube also supports 360 video onto the platform; the philanthropic shoe brand Tom’s leveraged this tool to give viewers a virtual trip to Peru. But this method requires special equipment and a 360-camera. While you can upload and host 360 video on YouTube, you can’t create it there like you can hotspots.

Philips shows just how much fun you can have with interactive video – all the while telling a compelling brand story. Their video for the Click & Style electric razor stars a freshly-shaven narrator who has trouble recalling how he spent the previous night. Viewers can click on different hotspots, each of which branches into a different version of the story. As the narrator describes the various accounts of the night before, he takes on different facial hair styles and accents. The video not only sells the product, but is entertaining as well.

Imagine you’re camping in the woods alone, and suddenly a bear stumbles out of the trees and into your campsite. What do you do? That’s the question Tipp-Ex asked viewers in their “A Hunter Shoots a Bear” video. If viewers selected “Shoot the bear,” the video’s narrator protested, reaching out of the frame to white out the word “shoots” from the video’s title and letting the user select what he does next. Options included dancing, singing, hugging and many more outrageous activities. “A Hunter ____ a bear” quickly became a fun, ridiculous, albeit strange experience that audiences went crazy for.

This fashion and beauty store shows how you can use interactive video to drive e-commerce sales. They paired a fun music video concept with hotspots, partnering with all-girl band JUCE to promote their upcoming single. Throughout the video, viewers are prompted to visit the Asos site via hotspots to shop online. This video is not only a great example of how to tie your business objectives into your video marketing, but also shows how you can leverage a timely event (like a major artist’s song release) to build hype around your brand.

Asos did a great job promoting sales in their music video, but Zappos takes v-commerce to the next level. Their “Shop This Story” video was a holiday promotion designed to increase end-of-the-year profits. Throughout the video, they feature shots of people dressed in Zappos clothing, outerwear, and shoes, using YouTube hotspots to link directly to the product pages on their website. This unprecedented technique allowed viewers to purchase exactly what they saw on screen. JCPenney went on to copy this method years later in their own video series, but Zappos was the first to set the trend.

As an international sensation and global gaming phenomenon, it seems like Minecraft couldn’t get any better – until it was paired with interactive video. This experience is literally a choose-your-own-adventure video game. Viewers take the perspective of a Minecraft player, making choices about which path to take to complete the level. It shows branching at its finest, and is a great example of how interactive video can gamify the viewer experience.

Who Wants to be a YouTubillionaire

Playing off the popularity of the hit TV show “Who Wants to Be a Millionaire,” this game show-style YouTube experience puts viewers in the hot seat, leading them through a series of trivia questions, and even giving them the option to phone a friend. This user-created video shows just how much viewers love this type of content – so much they’re even making these elaborate experiences themselves.

Remember going to the arcade and waiting in line to play the popular street fighter games? One YouTube gamer recreated the experience online using YouTube’s interactive features. He used hotspots to mimic a video game controller, letting viewers select between different characters and moves like kicking, punching and more. Is interactive video the future of video games? These gamification trends suggest the industry is heading in a much more user-engaged direction.

Saved by the Bell

YouTube users aren’t the only people creating game-like videos on the platform. The hit 90’s show “Saved by the Bell” has their own retro, 16-bit YouTube game that uses a nostalgic Nintendo-like animation style. The game’s plot line prompts players to make decisions for the show’s star, Zack Morris, as he tries to help each of his friends with a problem.

Now that you’ve seen some great examples, you might be wondering how to make your own. Luckily, YouTube makes it easy to add interactivity to your videos.

Within the YouTube Creator Studio dashboard (where all video content is managed), simply select “edit” next to the video you want to add features to. From there, you can add Cards, End Screens and more. Follow YouTube’s intuitive user flow to customise your video with these clickable interactive elements. Pro tip: While you’re on the Creator Studio, you can also add other enhancements to your videos, like filters, blurring, music, colour enhancements and more.

YouTube has a ton of great features you can add to your videos, but there’s a lot more you can do with interactive video that YouTube can’t do for you. Many brands choose to work with a company that specialises in this type of media to take their video content to the next level. If you’re looking to up the ante on your interactive game, consider hiring an agency that can create more customised hotspots, 360 videos and in-video branching experiences.

Interactive video isn’t going anywhere. In fact, it’s just getting started. 78 percent of marketers who used it last year found it to be an effective strategy, and we anticipate that number will continue to increase as brands find new ways to use this media to promote product and drive sales.

As you’re exploring the world of interactive video, consider starting on YouTube; the platform makes it easy to add features like hotspots to your video content without complex, expensive editing software. This method of creating and promoting interactive videos is a great way to dip your toe in the water if you’re unfamiliar with the area, or if you don’t have a budget for it this year. As your videos become more sophisticated, consider pulling in an interactive video agency to add extra polish and professionalism to your videos.

No matter how you begin, it can be easy to get overwhelmed when thinking about how to use interactive video in your video marketing strategy this year. With so many different features, tools, tricks and more, where do you begin? We’ve taken the guesswork out of the process with Getting Started with Interactive Video, our e-book that’s filled with everything you need to know to make your first video. Give it a read to kickstart your interactive video journey today.