How Important Is Video Player Colour?

Adam is Head of Content at Wyzowl. Leading a talented, fearless team of writers, Adam's passions include video, growth marketing, brand storytelling and referring to himself in the third person.

Video marketing is a competitive gig.

Success isn’t just about the content of your video – but also how it’s presented on the page.

Does it stand out? Is it crying out to be clicked?

If the answer is no, you could potentially be missing out on precious video views – and a glorious opportunity to tell your story.

We were really interested, then, to see the results of research carried out by our friends at Wistia. They wanted to find out how a video’s play rate might be affected by the colour of the player window.

Here’s a summary of what they found:

The interesting thing is that Wistia don’t purely hang this significant increase on video player colour. In fact, they believe that it’s because marketers who are customising player colour are also adhering to similar video best practices. In other words, they’re the people who truly optimise their video player for maximum clickability.

“The people that customize their video player with their own colors tend to be the same people that also pick great thumbnail images,” they write, “adjust the player controls to suit their needs, promote their video for their followers to watch, and put in the extra effort to increase production standards.

It is the combination of all these factors that increase a video’s play rate. But it seems that customizing the player color doesn’t hurt.”

So, which colours actually perform best?

It’s interesting to note that blue is the most popular colour among marketers. While black and red players had the most unique plays, six of the top 10 non-default videos by unique plays were some variation on blue. 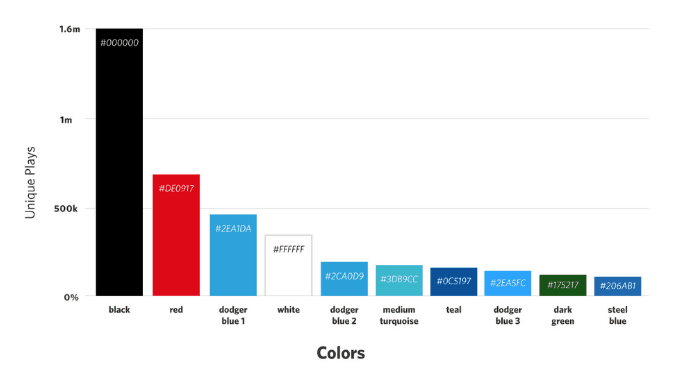 The highest play rate overall belonged to #C7C7C7 – otherwise known as silver – which enjoyed a play rate of 47.3%, meaning almost half the videos loaded with this colour were played, giving silver 4 times the play rate of the default coloured player. 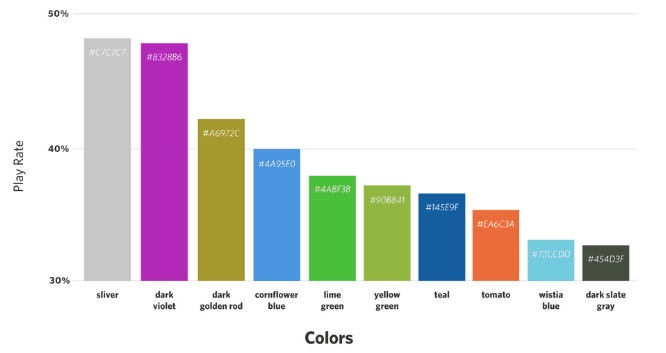 An interesting general trend is that the colors with the lowest play rates seemed to be darker than those with the highest play rates. It stands to reason, then, that a brighter colour might help the player stand out – making it more enticing and increasing the likelihood of the video being played.

It seems that player colour can make a real difference to the play rate of your video, but this is probably because people who customise the player window are also optimising other essential components of their video. The bottom line is that you’re probably missing a trick by accepting default options; take the chance to customise your video player to match your branding, and you’re likely to reap the rewards. Take a look at the full findings over on Wistia to find out more!

Since we started Wyzowl in 2011 we’ve had simple fixed pricing. Whether you’re a startup or an enterprise, we’ve got a package that’s right for you. Fill out the form below and we’ll send a FREE info pack with everything you need to know about our service, straight to your inbox.