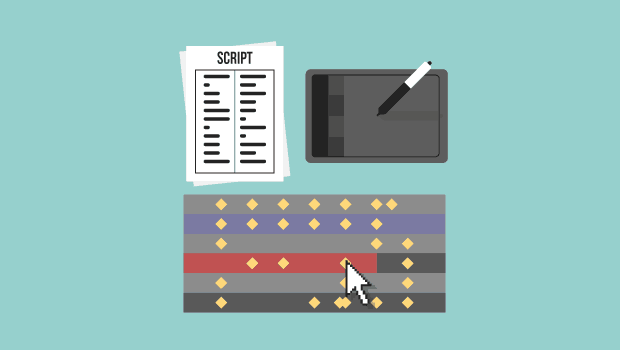 It seems like everyone is making videos these days, and it’s no wonder! Did you know that an introductory company email that includes a video receives an increase in click-through rates by 96%?

In this blog post, we’re going to talk you through every step involved in animated video production — including how long you can expect it to take!

The first thing involved in animated video production is scriptwriting. Once you get in touch with a video production company, you will usually talk through your ideas, and the key messages that you want to convey in your video. More often than not, you will be asked to support this with a brief document that the scriptwriters can refer to when creating your script.

Within this first step, the length of your video will be decided, along as what kind of characters, if any, will be included. One minute of a professional voiceover recording is equivalent to approximately 140 words of text, so this is what most animated video production companies work to. At Wyzowl, we highly recommend keeping your video between 1-2 minutes as this timeframe is best for engagement purposes. To find out more about this, take a look at this short vlog from our MD, Matt:

At Wyzowl, we take 3 days to create a first draft of a script based on your brief document. At every stage within the process we offer unlimited revisions, which means we’ll change your script until you are 100% happy and ready to move forward to the design stage.

Once your script has been finalised, it’s time to get your graphics designed. This is the process of illustrating everything that was mentioned in your script, from characters, to the moon, to a dog driving a race-car! Whatever you’ve seen on paper is brought to life through design. And, because all of it is created from scratch, your bespoke video is completely one of a kind.

After eight working days, you will receive a completed storyboard so that you can see what everything will look like before it is put together in your moving video. When studying your storyboard for the first time, you should see if the plot of the story has followed what your expectations were when you read your script. If not, this is when you will want to begin requesting amendments from your animated video production company, because it is vital that the visual components of your video reflect your brand, and also the messages you want to get across to your customers.

Once you have signed off the storyboard, it’s time to further clarify what kind of voiceover artist and music you want. This can differ depending on a number of things, but ultimately, the voiceover and music should always reflect your brand. For example, if your brand is B2B, you might want a serious voiceover, with corporate music. However, if you are B2C, you might want to be a bit more fun with your music, and make your voiceover a touch more friendly and relatable.

It’s worth noting that the nationality of your voiceover should be shared with the majority of your customers. At Wyzowl, we can record your video a number of times with separate voiceovers (for a small charge). We can even translate and outsource international voiceovers, this is something we often do for international clients.

This is the final step in the animated video production process. This is where your video really comes to life!

The animation team take all of the previously created assets: the script, the storyboard, the voiceover, and the music, and mix it all together to create your finished, engaging video. Animators need to have a keen ear, and a keen eye because everything about an animated video has to be seamless in order to maintain the illusion and keep the viewer immersed within the story world. This involves making sure even the finest detail is taken care of, for example, ensuring that a character’s footsteps make sounds as he walks across the screen.

Once you are happy with the animation, your video is complete!

A lot more goes into animated video production than you might think! This is why it is always better to order your video from an experienced agency. With over 1,100 videos under our belt, it’s safe to say we know a thing or two about animated videos here at Wyzowl! We also offer fixed turnaround times and unlimited revisions until you are 100% happy with your video. If this sounds like something you’d be interested in then please get in touch for a friendly chat 🙂