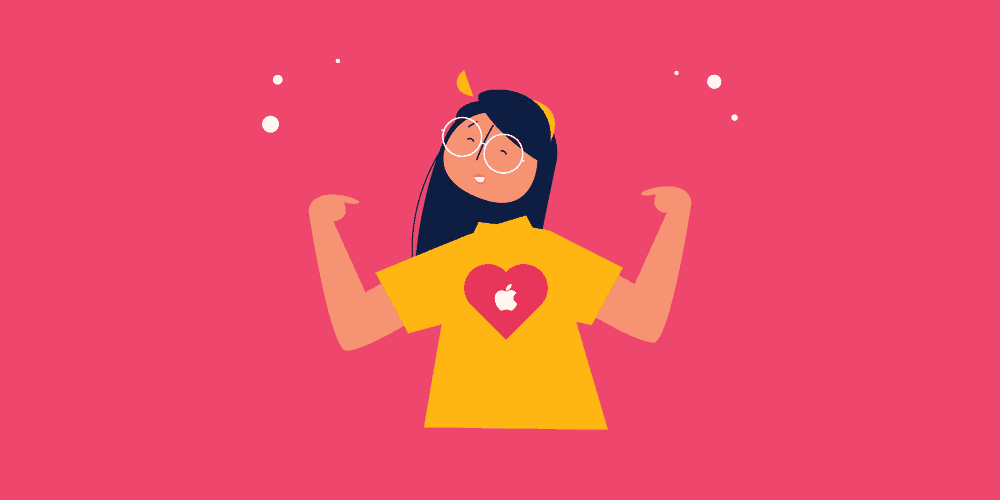 Why Do People Love Apple SO Much?

Today, Apple launched the iPhone 6 and iPhone 6s Plus.

The only reason I know this is because I was woken to a stream of early morning WhatsApp messages from a friend who was stood queuing in line with 200 other people, waiting to get his hands on the new phone.

To me, it was a ludicrous notion that anyone would wake up at 5AM just to be one of the first to get the phone.

But as a marketer, the Apple frenzy is something to admire.

They have an army of loyal fans that would promote Apple until the cows come home. They buy absolutely everything that they produce, no matter what the cost.

In fact, they have made the news once again for topping a poll as the coolest brand in Britain!

So how do they do it?

I did a quick office poll to find out why everyone loves Apple and the top reason is that “their devices just work”.

In terms of functionality, Apple knows how to create a product that’s really easy to use. Pick up an iPhone or log into an iMac and you can use it, without struggling to work out its features.

Apple is a company that is known to put ease-of-use as the main goal when designing a product. And as technology continues to advance, Apple still manages to create a product that works for absolutely anyone using it.

According to the developer library section on their website, the iOS focuses on three key aspects:

Whether you sell a physical product or a service, making things simple for your audience is a crucial part of getting people on side with your brand. Something that Apple stands light years ahead of it’s competitors on.

#2. They keep it consistent

If there’s one thing that Apple is good at, it’s having a consistent brand. Of course they evolve, but the changes they make don’t disrupt the look and feel of their overall brand message.

You could be watching a TV advert and even before the branding has popped up, you’ll know that it’s Apple – and that’s the sign of a good brand.

This consistency runs throughout every channel they have. You can expect the same customer experience when you’re visiting their website as you do if you were visiting one of their stores.

Their clean modern look and feel can be seen across everything they do and this really helps people become familiar with them, no matter which channel you’re choosing to connect with them from.

A company has to be evolving, otherwise it’ll get lost amongst its competitors. Even companies like Apple that stand out as leaders, will continuously evolve so that their audience can always expect something new, fresh and exciting from their latest product launch.

This is the reason that they stand as a leader, rather than a follower.

In fact, one of their Apple designers was quoted in saying: “Our goals are very simple — to design and make better products. If we can’t make something that is better, we won’t do it.”

If you want to be a leader in your space then you need to continuously evolve. And I don’t mean find out what your competitors are doing and copy them. Hire researchers and forward thinkers who will drive your company forward and develop new things that your customers are going to love.

What started as a computer company, is now famous for its phones, music, TV, and more recently, watch technology. Apple continues to evolve and you should too!

#4. They make the consumer feel good about themselves

This is probably one of the biggest reasons why I think that people love Apple. It’s because they make the consumer feel like they are better person for having the product.

The story that they convey throughout their marketing is a powerful one. It oozes lifestyle, innovation, passion and style – and why wouldn’t you want to be part of that? It’s like an exclusive club that has millions of members.

So when you buy an Apple product, you’re sharing and representing those same ideals that this very brand stands for.

And it’s not one single thing that can be pin-pointed to this. You can see it in the powerful copy they use on their website, the stylish images in their adverts, and the sleek design of their products. It’s all about telling a powerful story that will make your audience want to be a part of everything you do.

#5. They make their own decisions

“If I had asked people what they wanted, they would have said faster horses” – Henry Ford.

In the world of marketing this may be a tad controversial, but Apple doesn’t rely on market research, focus groups or personas to create their products.

Instead, they listen to the people that they hire. Their designers and engineers work on the notion that they need to create a product that they would want themselves. This is a mantra that Steve Jobs instilled within the company, that the product has to be something that the employees personally couldn’t live without, otherwise it’s not good enough.

I’m not saying you should completely ignore your audience, that would be foolish. But you are the experts in your field, so use that expertise to create something new that will your audience will love.

#6. They take their time

When it comes to designing the hardware, Apple is known for its slow approach. But in business terms, this again is not something we see very often.

Many companies will rush things out before they’ve had time to fully develop them, whereas Apple is known for spending years trying to perfect their products to make sure that they hit the mark. Jobs is cited in saying that they were developing the iPad well before the iPhone came out.

Many models were scrapped and deemed not good enough for release, which just goes to show the time that was spent making sure it was perfect for release.

The takeaway here is that if you want to produce a high-quality product for your audience, then you need to spend the time doing so.